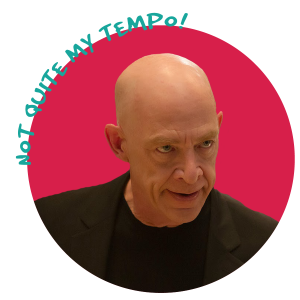 A lot of expectations

First of all I apologize in advance because I might not be objective (but after all who is? A robot?) Because I heard so much praised about this movie, it got so many awards that I had a lot of expectations… And of course I was disappointed.

Oh! how I wanted to love this movie. I am a sucker for a feel-good indie movie from a promising director (here’s our Pinterest board of directors to follow) in pop color, musicals and dah Ryan Gosling anything (except Lost RIVER ^^).

The movie begins with these sweet words: “Presented in Cinemascope”. Cinemascope was used in the 50s and the 60s to shoot in a revolution wide-format thanks to its anamorphic lens. The movie was shot on film (not digitally) with Panavision equipment in a widescreen format, but not “true” CinemaScope as it has some technics flaws especially with close-ups. Anyways, presenting it in such format is a nice tribute to 1950s musicals.

It instantly made me think about a Jacques Demy movies with a retro all singing and dancing number in bright colors dress and polo shirts. Unfortunately, the inspiration is all on the surface, in the looks.

The story is set in Hollywood depicting a love story of talented artists who want to make it and their struggle and jazz music: Chazelle’s favorite themes.

Firstly, the songs are not that numerous which is bad because it makes the movie not really a musical in a way one could expect. It’s also good because Ryan Gosling and Emma Stone are not singing that great. It sucks out a big part of the musical fun for me but it was apparently a wish for the director to make it more realistic (source).

The music is very good as expected even though hearing the main theme (“City of Stars”) over and over again was not so refreshing anymore.
Another good point for this movie is the cinematography which is also pretty obvious just looking at the stills and trailer for the movie.

Now that the positive points are out to let’s dig deeper!

The problem with their “love” 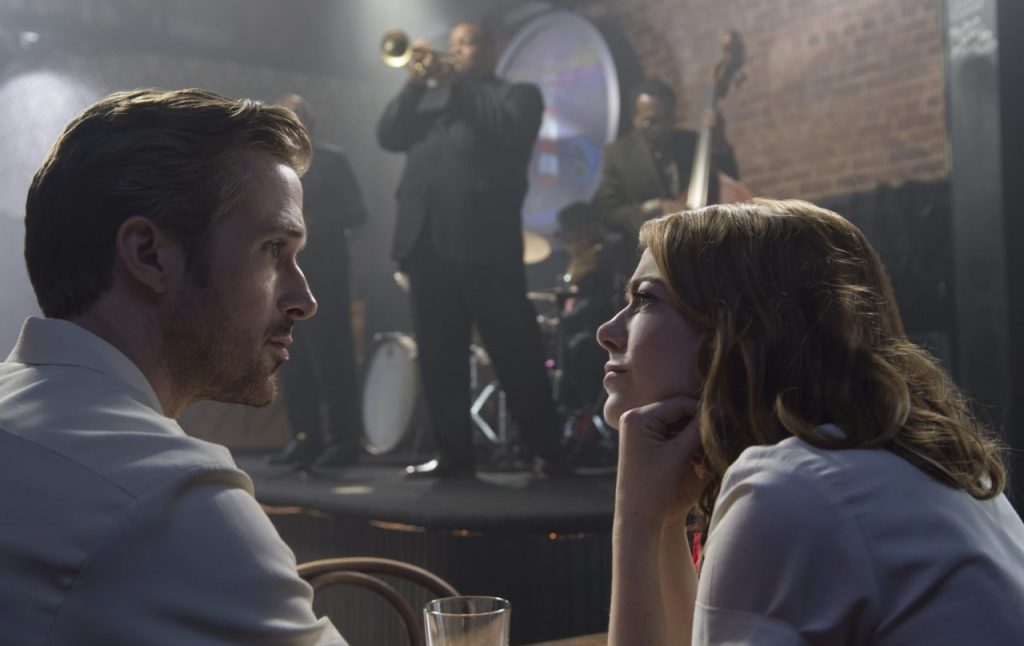 The movie centres on Emma Stone’s character Mia, who is an aspiring actress who has it “hard”: she is a barista on a studio lot and chose to follow her passion by having to pass an audition with mean people who don’t care about her. Emma Stone delivers a great interpretation of her, so great that you can see that Mia is also a great actress. To me, she is less impressive when she is dancing and singing.

Her love interest is Ryan Gosling’s character Sebastian, a proud but passionate pianist who wants to “save jazz” and who pushes Mia to surpass herself while he doesn’t necessarily listen to his own pieces of advice.

When they are not busy dancing and singing cutely (ouch), they have somewhat of a meaningful conversation on how to follow their passion.

Ryan Gosling and Emma Stone played together in several movies (“Gangster Squad”, “Crazy Stupid Love”) so we’ve seen that they usually have chemistry on screen. In “ La la land”  I had trouble being convinced by their love story though. Maybe it’s due to the time ellipses, or maybe because there’s not even real love there if you look closer at their relationship.

-Sebastian is successful that they have no time to be together. And Mia can’t join him on tour because she has to rehearse her single play. (Perhaps she could rehearse there couldn’t she?)

-He has a unmissable photoshoot so it’s impossible for him to see her play,

-She becomes successful and HAS to go to Paris which is SO far and he is so busy!! Wait! He quit his job so he is actually free! But he’d rather let her concentrate on her art so he dumps her and makes her totally miserable. That’s much better indeed.

I don’t really understand why you have to necessarily be single to be successful as an artist. There was a similar scene in Whiplash where Miles breaks up with his nice girlfriend to concentrate on his craft.

Indeed, if all that is so hard to handle not sure that means they are truly in love or like Chazelle said in the press kit “The love of their lives”

They are also so judgemental to each other. Furthermore, Mia acts like a child who has to be pushed around. Sebastian even tells her she is a baby!

The reality is that “La la land” is about people who like themselves and their passion more than each other.

The problem is that the whole story is pitched on this true love that comes in the way of their dreams. So what’s left then?

Since their love is not credible, where can we get the dramatic tension from?

Maybe in their struggling artist side? Well not so much since we don’t see any struggling on screen.

You hear the characters say that Mia has been struggling for 6 years. But unless through some auditions, you don’t really see or feel it.

Maybe there’s also a pace problem in this film. To compare, Whiplash was also pretty fast paced but it went well with the screenplay, with the jazz tempo. Here, the story needs to go slowlier and deeper so you can at least know the characters. Once again they look cool and cute. Given all that, it is very hard to identify with them, to suffer with them, to even understand them.

You appreciate to see those guys flirt. But true love, struggles and sacrifice, I didn’t see it better yet, felt it.

Thus, the whole movie lacks dramatic tension and feels so bland. What an irony for such a colorful imagery: Blah Blah Bland (I wish I found this name myself but I read in this review that liked the movie even less than me^^)

It is a cute could-have-been movie 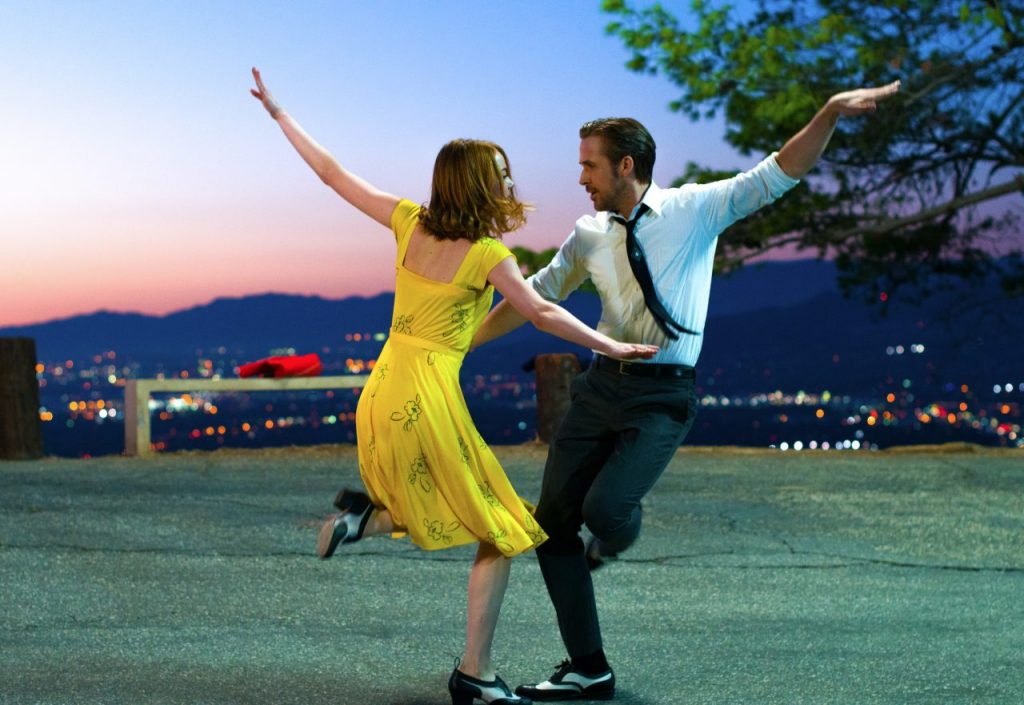 It could have been a masterpiece but it is just a cute nostalgic movie that leaves you neither happy nor sad nor shaken. It passed on me like a little wind that gave me a few smiles but not like I was witnessing a grand film that would make history by landing the most Oscar nominations, not that the film is to blame for being successful in that department but hey! like I said I had expectations.

If I had to sum up, the film here’s what I would say: It’s a cute story about two people following their dreams and being inspired by each other though not really loving each other. The story is shallow, the characters are one-dimensional and underdeveloped. An attempt at tension is made through false pretext in their relationship. A lot of time ellipse doesn’t help this relationship that is hard to find credible.  There are musical numbers and nice songs. The colors and photography are nice and as well as references to Jacques Demy’s cinematography.

Since I loved Whiplash, I want to give Chazelle another chance to prove that white privileged and one-dimensional self-absorbed artist is not all he cares about. At least, you can take with you the true star of the Chazelle’s film: the nice jazz songs composed by the great Justin Hurwitz (Whiplash) and probably leave the rest.

The film has a lot of “coolness” potential and awesome songs but a bit too cute to be dudechick material.