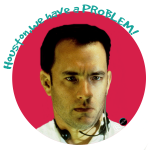 “ Mother !” the latest film from Darren Aronofsky, seemed very dark after watching the trailer. You expect a gloomy, disturbing and sexual atmosphere with this director (“Black Swan”, “Requiem for a dream”), with this film he embraces the horror genre. Here you find the same codes as he used in some of his previous films, but with an underwhelming first part (you are not really “disturbed” during it) and a second part that lacks subtlety.

Jennifer Lawrence is the voluptuous “ mother ” solely filmed from very close-ups shots (meaning from her eyebrows to the top of her chin) which makes you want to throw up very quickly and be a bit fed up with the actress’ “wax doll” interpretations (as featured on the movie poster). Your only relief is when you get to see the scenes through her eyes or when the camera stops being glued to her face to focus on her nipples. (We know the director is in love with her but it’s a bit too much). That being said I still prefer to see that than to endure the on-board-constantly-moving-camera the whole time. 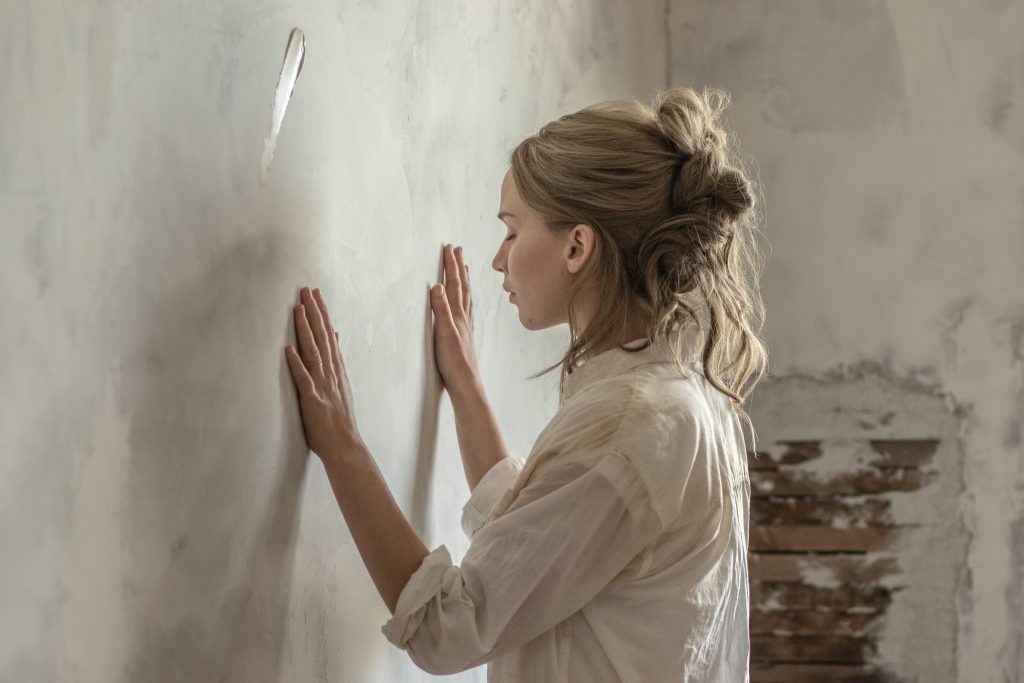 I understand the director’s position to create some trembling images on screen to reinforce our feeling of discomfort, of disturbance, reduce our vision and make us shudder but it’s a bit too much. Like I said ” Mother !” lacks subtlety.

The first part of the film is very slow. Some strangers come squat in “Him” (Javier Bardem) and Mother ’s house, that she renovated with her bare hands and wants it to be a “paradise”. These intruders have no manners whatsoever nor any consideration for their hostess. This idea of Mother being abused will last the whole film. It enables our frustration to get higher and higher but mostly towards the directing rather than what is happening on screen. We are forced to witness Mother ‘s passivity while the camera stays glued to her face and whirl around in 360-degree shots. It gets really annoying and you just want something to happen or her to react. 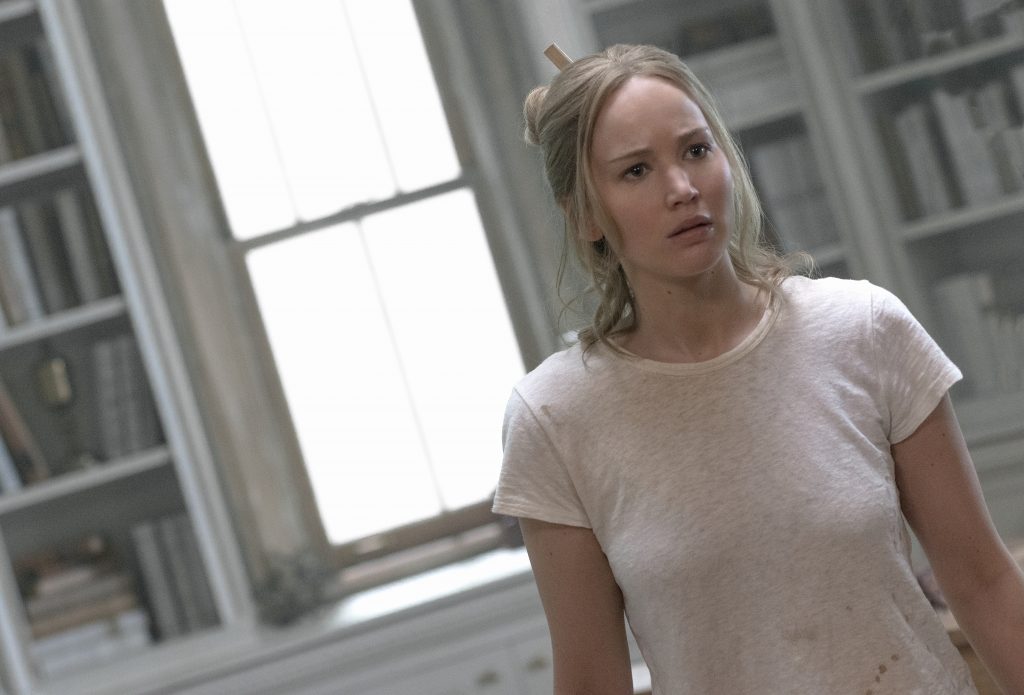 Because the movie is a big allegory to the Bible and Mother Earth, the screenplay, while trying to remain in reality, is not very credible and that since the beginning of the film. Because of this, the story doesn’t really embark you. The screenplay flaws might come from the fact that it came to Darren Aronofsky in dreams and that he wrote the movie in five days instead of a several years process with his other films.

In fact, the house is Eden and the squatters are Adam and Eve, the first Humans created by God (Javier Bardem). The biblical references are numerous and a series of events quite serious will happen. They destroy the forbidden apple and their sons (Domhnall and Brian Gleeson real-life brothers). From that moment, the police should have been involved and stop the insanity. “Mother” should have figured out God’s true intentions but the plot goes on and on unchanged and the abuses with it until the last minute of the movie.

*End of the minors spoilers*

The second part consists of a lot of repetition that seems to last an eternity. Once again, it’s the same idea repeated over and over again and you expect everything that comes to pass. At least we are shaken a little by the ostentatious directing. As if the director had to restrain himself the whole first part of the film and let it all explode in the second in an attempt to surprise or shock us. Well, you get awaken but surprised, no. 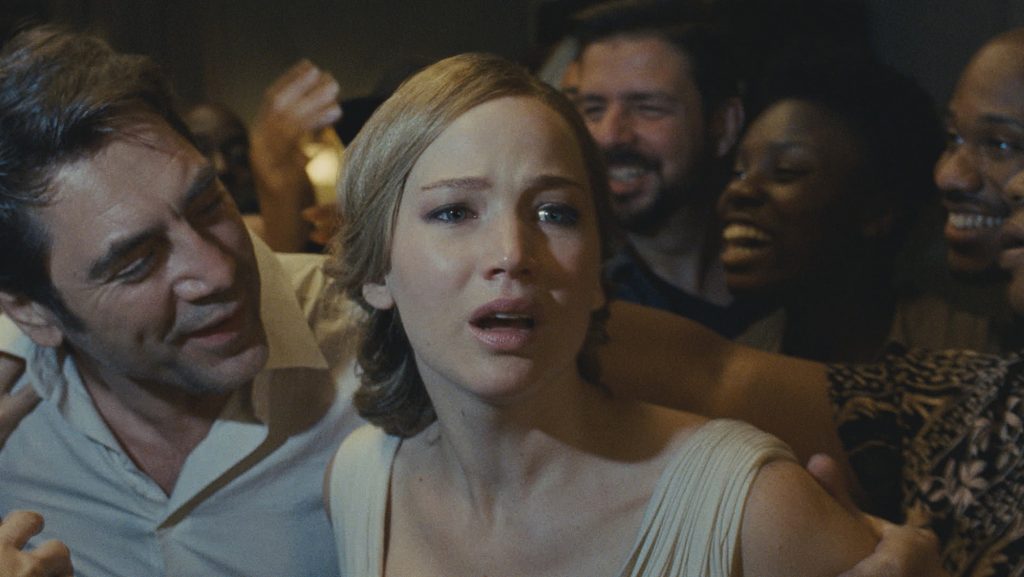 Left to right: Javier Bardem and Jennifer Lawrence in mother!, from Paramount Pictures and Protozoa Pictures.

Mother ! is thus a movie about the fact that us humans don’t respect anything and are destroying Earth with our constant bullying (that is not necessarily untrue!) and that god is a selfish prick and totally obsessed by the idolatry of his creations.

This idea we get from the first scenes, and two hours later nothing new had come up. The only thing you might feel is sadness for Mother but you mostly want the movie to stop. So maybe this is the strength of this movie: to be able to disturb you, to annoy you even. It shows you see how vile you are, but the lack of subtlety of the screenplay, the flashy directing might not encourage you to go green, unfortunately. You just get the impression that the director wants to insult you -which he has the right to-but also that he place himself above us, as the creator, the lover of “Mother” and thus that he is himself God and that’s annoying. Maybe a short film would have been better. This format would have avoided the screenplay’s voids and the over-the-top directing to make up for it.

It is the not the first time Aronofsky film a religious subject with his previous film “Noah” and that ends up to be disappointing. 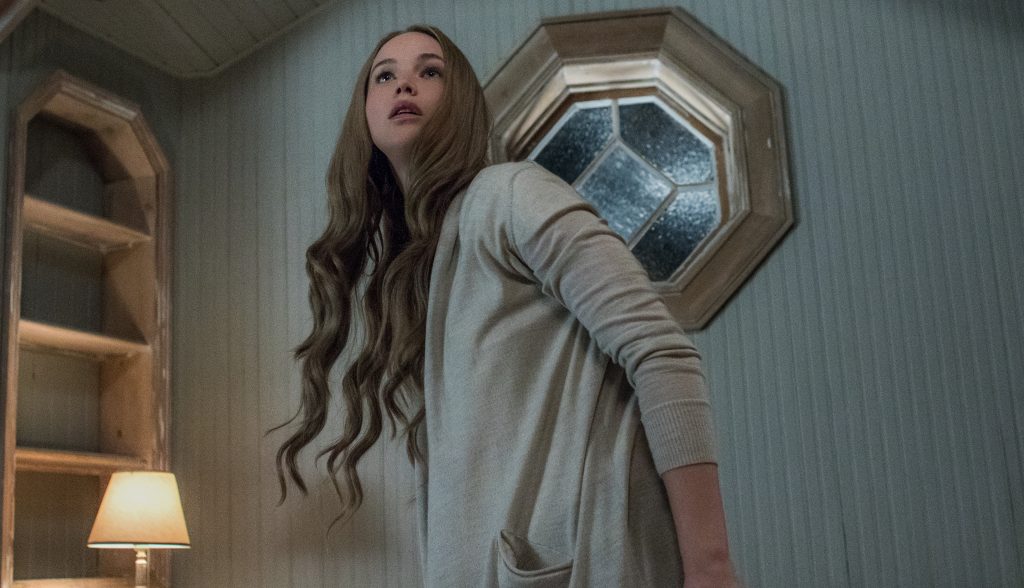 To sum up, God is an ass, humans are his worst creations. Indeed, we have to respect Mother Earth because we are just intruders on her territory that doesn’t belong to us. Not sure I’d advice this movie to help the cause but rather “Before the flood” produce by Dicaprio.

sidenote: The fact that we hear only certains languages in the movie from the bad humans seems like the director condemn only certain populations in terms of religious fanaticism and pollution. Not sure those guys would appreciate. I know I don’t…

By Priscilla Ruffe in Reviews on September 20, 2017

By Priscilla Ruffe in Reviews on September 20, 2017