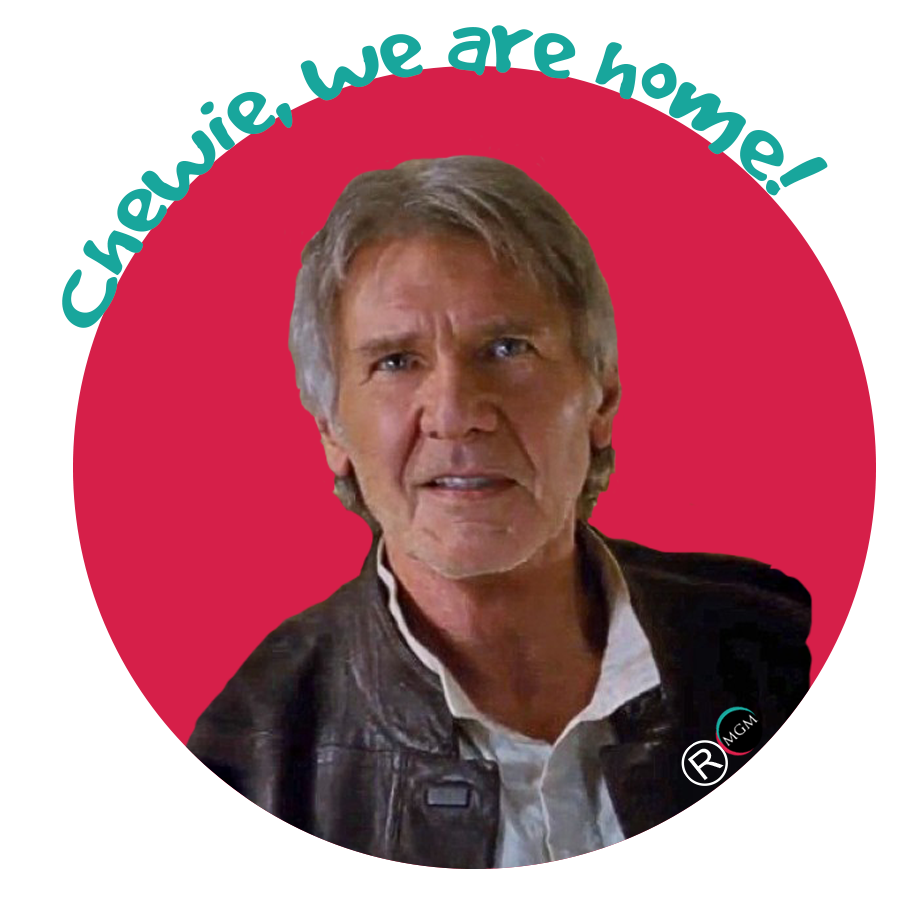 We are captivated, excited, nostalgic or frustrated with STAR WARS THE FORCE AWAKENS which is the very expected come back of the saga

Before everything, better say the obvious first about this Star Wars movie:

However, now that I’ve watched this Star Wars with more awareness or as an “adult”, I have less fascination and more analysis concerning the movie that doesn’t threaten any pro’s mentioned above.

Fan Service: for here or to go?

The expectation was so strong and fans’ pressure so significant that it’s hard to consider making this movie without keeping one first big priority in mind: pleasing the Star Wars fans. JJ Abrams generously gives us many references and similarities with the former movies that it creates an overall coherence and make us naturally accept this new movie into the big Star Wars saga family.

Nevertheless, as all good things, it’s easy to spoil them. Probably because I am no longer a child, the surprise wasn’t as strong. As a matter of fact, you have to admit that this film is the exact copy screenplay wise of – A New Hope – episode, which could be hardly more efficient.

With this “deja vu” scenario conditioning, the plot is already known. Indeed.

It’s my main observation about this movie. Using all the story mechanisms already seen in – A New Hope- , the plot is developed as little as possible, expecting the audience to simply do the rest: “Since Luke was looking for adventure, Rey should want the same.” “Since Luke was looking for his identity and his destiny, it should be just the same for Rey.” What if it shouldn’t? I mean, do you really think you know this girl after watching the movie? How can you understand this character when you have so little material to figure her out? I guess that’s a specific will from the producer to spare us too many details about her in order to keep more for the following movies. However, that the very only thing I really care about in this new saga.

Can anyone tell what this crisis is about? What’s is her need to run into the forest like she did? It doesn’t make any sense!?

And I think it is the same for the bad guy, sometimes he doesn’t make any sense. Kylo Ren has the impossible task to succeed Darth Vador myth. Necessary alter ego to Rey, his character is vital. However, he looks incomplete or his identity is not really defined. “Since Anakin was tempted by the dark side for those and those reasons, why spend more time explaining Kylo’s?” For me, it makes it lose his bad guy credibility.

Do his Anger Management Crisis are supposed to make him more threatening? or are they just random WTF sequences?

At least his crises are funny.

The under-developed element of the movie is Finn which made me even more interested by him. He brings a brand new – and much welcome spirit-  and humor into the movie. You know the same kind of crush you had for Han Solo character, so cool, saying great punchlines that almost outshined Luke. It is the same here with Rey.

If this movie is the true “homage” to A New Hope episode, there should be a confrontation as tragic as the one between Luke and Darth Vador, between Rey and Kylo Ren. The confrontation scene in The Force Awakens could have had more depth and dialogues to increase the drama effect.

I think Kylo is just about to get a cramp using so much the force with his hand while this ceaseless face to face scene.

I believe the dramatic climax was in the OTHER scene which was REALLY expected (you all know which scene I am referring to).

So there are some non-subtle aspects among many very good ones. But they are as noticeable and hardly frustrating as it is a cult universe about my childhood.

So I was a bit disappointed. Is it bad spirit or extreme expectations? I let you be the judge.

Still, I have to mention this one, as it had to make you smile when you watched it: this tremendous Deus Ex Machina with the pilot Poe Dameron that comes out of nowhere to save the day!  😉

To conclude, yes it is a fan service film, but you won’t stop asking for more. Necessary step, in order for all fans to better accept and welcome the following films, which I hope, will bring more answers by asking the right questions.

because to become a Jedi Master, dudechick you shall be!

By Laura Kressmann in Reviews on January 7, 2016